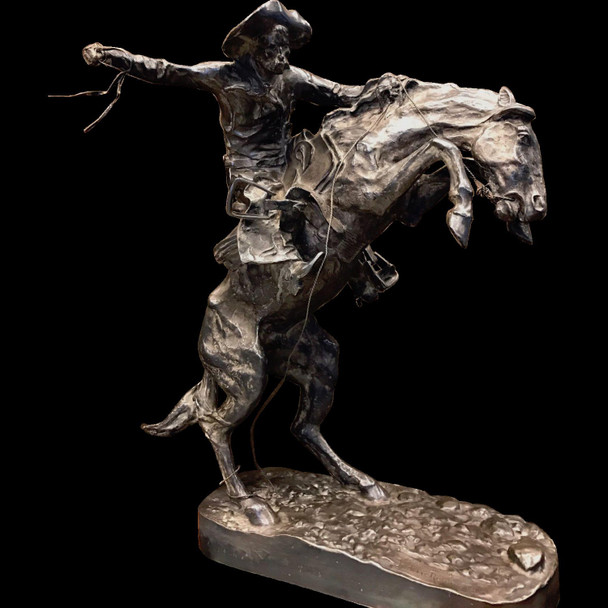 Frederic Remington Originally caste in bronze with a marble base; the Bronco Buster is often gracing the background shots at the White House when the President is speaking. Prior to Trump's election, it's image was coincidentally seen in the background in Trump's Tower. This specific statue is the first to be cast from it's original mold in 1895. It has incredible detail consistent with the original bronze's worth millions of dollars today.

This wonderful Rare Pure Silver with great patina statue of the Bronco Buster by Frederic Remington has dimensions of about 18 x 12 x 22 inches. The Bronco Buster (originally named The Broncho Buster) was Remington's first sculpture, created over an eight to ten month period in 1895 when his full range of artistic ability was at its height. Derived from his previously published drawings and paintings, the rearing horse and rider was a revolutionary concept in American sculpture. It was a technical tour de force. with The Bronco Buster, Remington almost single handedly changed the course of Western American sculpture and the piece was met with such immediate and universal success that an entire page was devoted to it in the October 19, 1895 edition of Harper's Weekly. The Bronco Buster represents a human struggle to control nature, and has become a classic symbol of the American West. Stirred by action, Remington designed his sculptures to feature movement—challenging the limits of the medium.

MSRP:
Now: $17,500.00
Was:
18K White Gold diamond set flip phone cover super quality!, 15ct tw. This unique piece was custom made and has larger and smaller diamonds throughout.  There are approximately 125 larger...